My Story with other cameras

The reason I bought a Blink!

(Video is NOT A Blink Video!)

In early 2000 my family was a victim of a crime that occurred next door but flowed over to my home. Shots were fired by the bad guys. It was terrifying but no one was hurt. ( long story)
As a result, I set up a perimeter alarm system to give me an advanced warning in case of any similar events.
The perimeter alarm woke me dozens of times with attempts to break into my cars. In 2014, I purchased the best camera system to try to capture what I was witnessing. (See the poor quality video)

This video is not a Blink video but the top of the line camera I purchased in 2014…terrible camera. I sent off to a forensic lab and they couldn’t even help me because of the poor quality.

Blink cameras are so superior to most if not all! 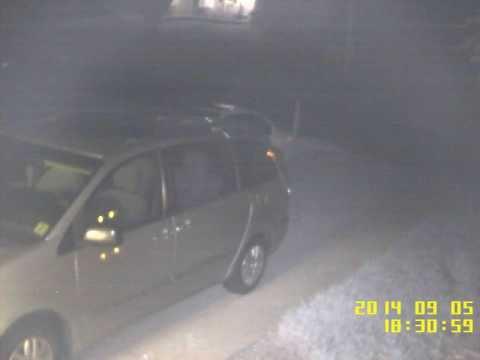 I’m so glad no one was hurt! I can’t believe how poor the quality is on that video, but I’m glad you’ve made the switch.

Thanks for sharing your story!

I can’t stand scum like that. Hilarious to see him take off like that. He won’t be back there anytime soon!

If you turn up the sound you can hear me yelling at them. “Caughtcha-hope you smiled!”

HAHA! I heard someone saying something, I thought it was the thieves talking to each other.

Makes this video so much better haha

By the way, I’m getting that voice alert system you recommended! I’ll let you know how it works!

That’s the greatest thing…the perimeter alarm goes off before the camera so I had time to get to my window and watch it occur then yell. I always say something so they know they’ve been caught. If you notice the time on the video…it all happened in 10 seconds. All the other times the guys come up the driveway and try the door handle in less the 10 secs then its over and they’re gone.
If I had had the Blink back then…the camera would have gone off as soon as the stepped onto the end of my driveway and I would have caught the whole thing.
I’m ready now.

Its great to see your setup works so well. That’s exactly why i’m getting the perimeter alarm. It would alert me before any of the cameras since they’re located a bit up the driveway. It would be amazing if Blink had such a system! (Hint, Hint!)

As for approaching the thieves, as long as you’re careful, that is awesome! Do you have any more footage of break-in attempts being squashed? I’d love to see that.

I don’t approach-never. I’m yelling at them from the second story window, it overlooks my whole front yard. So I have a good safe bird’s eye view.

Good outcome: Once caught 2 boys trying to break-in my cars at 4:30 am. (before any cameras just my perimeter alarm) They were taking their sweet time(obviously novice) -my wife came to the window and recognized one of the boys (15 or 16 years old). The next day I went and spoke to the parents(who I knew well)-at first they were hot mad and defended their son-I said OK then I’ll let the police deal with it if you won’t. They changed their tune fast…last I heard he was doing great in college.
95% of the crimes around me are community teenagers.

The boys in the video I eventually was able to indentify with the help of neighbors. I’m now the head of the Neighborhood Watch programs for our community of 300 homes.

The perimeter alarm woke me dozens of times with attempts to break into my cars.

I am curiouse as to which make and model is your perimiter alarm?
I use motion sensors to activate my SmartThings conected driveway lights.

I like this.
I can recommand SmartThings for that and a lot more home automation.
I have my ST system turn on my light in the drive way with a wireless motion sensor+send me an SMS/Push Notification on my phone and Play a Siran sound over a speaker hanging under my overhanging auning.

Does ST work the Blink too?

SmartThings has a 3rd party integration with Blink. I and a lot of others are asking for an official one for the long term. But as is, it works great. You can look at this link and you will find me and the creator @Rboy.

NOTE: THIS INTEGRATION HAS BEEN SUSPENDED BY AMAZON AFTER THE BLINK ACQUISITION Check out the Blink IFTTT Integration for SmartThings Folks have been requesting to integrate Blink Camera with SmartThings, so here it is finally. This has been...

BTW-
What I paid for that lousy singular camera with a DVR(back 3 years ago), I could have bought a 3 camera Blink XT bundle today.

You are not allow. Welcome to the DVR Anonimouse group.
I still have one camera hanging.